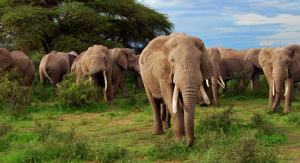 This half term, our theme is “Happily Ever After…!” based around traditional tales and fairy stories. We have a role-play castle with banqueting table and magnificent costumes to go with it.

Our small world area has a castle, fairy tale palace and a pirate ship. We have pirates, princesses, kings, queens, princes and even a dragon and a couple of unicorns, but only two knights to defend them all! If you have any redundant knights gathering dust, we’d be happy to put them to service again!

The three bears have moved into the book corner but Goldilocks has still managed to find them and the children are already enjoying re-enacting the story.

Just another reminder about our Foundation Stage Open Week from June 23rd to June 27th . You are welcome to come in and visit and join in with the children , and don’t forget to tell your friends as we still have places available in both nursery and reception for September.

Knowsley safari park 9th May
At last the day of our trip to Knowsley Safari Park arrived. The children arrived at school very excited, as the staff and parent helpers made sure they all went to the toilet and had the correct badge pinned to their jumper! The children waved “goodbye” from the coach and we were off!
It wasn’t long before we realised that being on a coach going through Cragg Vale on windy, bumpy roads was not the best idea, but fortunately we had enough buckets with us and there were no major incidents!
When we arrived at the safari park our wonderful coach driver drove very slowly and stopped at all the good places long enough to make sure that all the children had a chance to see the animals. The lions were a big hit! We saw lots of young lion cubs too!
At first we were disappointed that the driver could not take us through the baboon enclosure because of the damage they could cause, but we were able to park up by the fence and watch the mischievous baboons as they climbed on the cars- pulling at windscreen wipers and jumping on roofs. It probably was a good decision to stay our side of the fence!
The weather was good for us as it was not too hot, but we were able to eat our picnic outside and then we had a short time to explore the “bug house” and the farm and buy an ice-cream before it was time to get back on the coach to go home.

The coach was certainly quieter on the way back as the tired children fell asleep. They all thoroughly enjoyed the day and we were very proud of their attitude and behaviour. Thank you to the parents who came along to help. We hope you enjoyed the day too!

After our visit to Knowsley Safari Park the children in the Foundation Unit were inspired by what they saw. They talked enthusiastically about the different animals they had seen and discussed their favourites. Here are a few examples painted by the Nursery aged children.

Lots of children liked the tigers even though they were fast asleep when we saw them.
They liked the stripey fur. They looked cuddly but we knew they were fierce!

We saw the elephants near the end of our journey
but we didn’t see any that looked like Elmer!

The lions were a definite hit with the children. The daddy lion had a huge furry mane just like this one!

The Reception children decided to write about their safari park experiences. We looked at the photos on the website and thought about what we might write. The children talked to their friends to help compose their sentences. Then it was off to the mark-making table for some of them to begin their work.

The children used their knowledge of sounds in words to write and most of them did it completely independently! We were astounded to see them using their phonics so confidently and so well.

Some of them were so inspired that they went off to make more pictures and writing. Some even made their own books!

Welcome back and we hope you all had a good break

We hope you enjoy your visit to our web site. Here you can find out all about our school, what's happening and look at some of our work.

At Burnley Road Primary School we have a highly committed and professional staff dedicated to supporting and guiding your child's development.

We at Burnley Road, value the partnership between home and school and we are proud of our "open door" policy where parents and guardians are welcome to visit our school and discuss things wherever necessary.

The happiness of every child is very important to us both on an academic and personal level and it is only through a successful and supportive partnership between child, parent and school that we can achieve this.

Read more about our aims in our mission statement and find out about the schools's history. I look forward to working with you and your children .

Where to find us